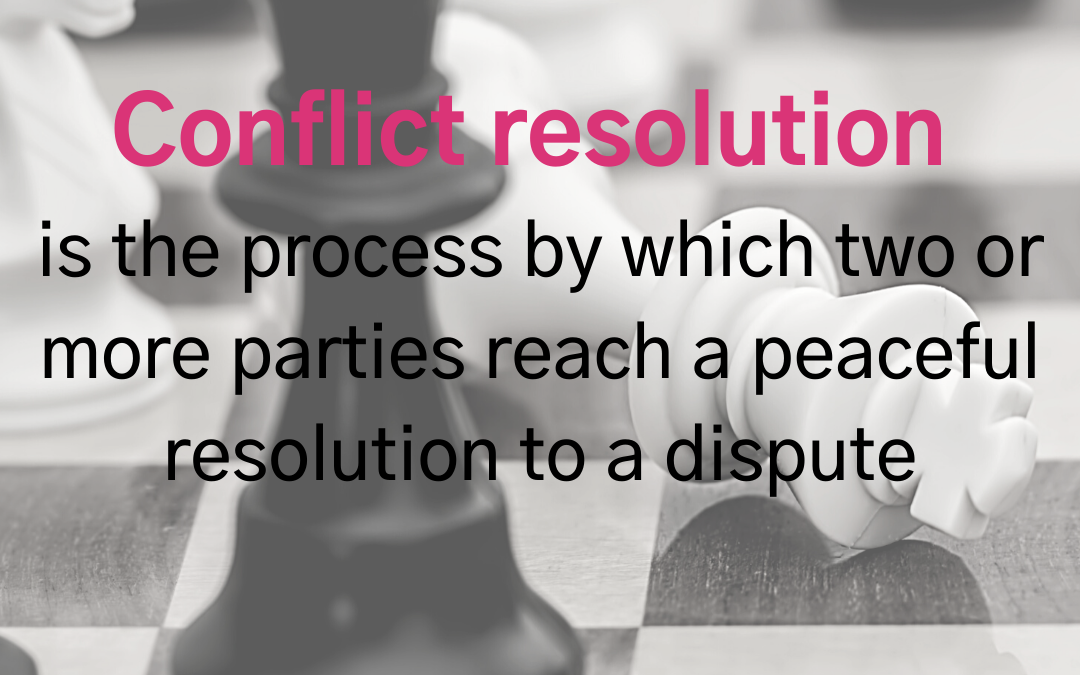 As we start to get used to life after lockdown and our restrictions being lifted including being encouraged to return to the workplace, we are seeing an increase in workplace conflict.

It’s understandable given what we’ve been through that tensions are fraught and there is nervousness about getting back to normal. Employees may have been furloughed or working from home for over a year, they may have changes to their responsibilities and are getting used to new ways of working. Relationships will have changed and it’s not always to just slot back into to where you left off.

Around 20% of people don’t even report workplace conflict, often resulting in anxiety and stress, periods of sickness absence, demotivation and not wanted to go to work. This causes a huge negative impact on mental wellbeing and productivity which if left to fester undealt with can progress to costly and potentially damaging formal action.

Even the smallest things can become full blown issues and you need to know what to look out for and how to manage them promptly and effectively.

Identify simmering workplace conflict is the first task. What signs should you be looking out for? Poor engagement with colleagues that previously got on well together, a sudden increase in sickness absence, decreased productivity and withdrawal and sniping amongst colleagues can all be red flags that there is an issue.

In more obviously instances, complaints about colleagues or even stand up rows identify an immediate need for intervention.

No one really enjoys facing conflict but in many cases disputes and conflict can be resolved peacefully and calmly and without having to follow a very formal process if you apply the right skills when managing them.

Active listening is truly focusing on what is being said. Repeating phrases used by the people involved when replying to them shows that you were listening and can help clarify any queries about the situation.

Emotional intelligence is the ability to read and understand emotions. It can help you stop the problem escalating whilst diluting the anger and frustration of those involved in the conflict giving you a better chance of them focusing on the resolution.

Patience may be a virtue and will definitely be needed while you listen to all sides of the argument. Take your time to absorb everything that the conflict involves and give yourself time to come to a solution.

Your ability to remain calm and impartial is essential, a lot of the time the reason for the conflict is only part of the problem, there may be previous incidents that have caused tension. Separate the people from the problem and focus on that.

So now you have the skills to manage workplace conflict how can you put them into practice?

Don’t be defensive and don’t pick a side. You may or may not agree with a point of view but it’s up to you to see the argument from both sides and see where each individual’s opinion is coming from.

Don’t lay the blame on anyone, it won’t help reach a resolution if one party feels they cannot be open. Instead actively listen and give everyone the chance to express themselves.

Be calm, when tempers start to rise it’s your job to cool them down, emotions will run high, but the conversations should be meaningful and not descend into a shouting match.

Encourage compromise, ask the people who the conflict involves what they think the resolution should be, they’ll be more likely to work to it if they have had an input into it.

Take notice of what’s not being said, body language speaks loudly and if one of the individuals in the conflict is less confident they may not feel able to say what they really want to, look out for signs such as rapid blinking, chewing lips or clenched fists which can show fear and anger.

Encourage openness in discussions, crossed arms show someone is being defensive or protecting themselves. There is no one size fits all in the cases of workplace conflicts, the best resolution would be for the instance to be resolved informally and for everyone involved to move past it and get on with working together but it isn’t always that easy.

If your employees know they can come to you with their concerns and that you will deal with them effectively with the least disruption it’s more like they will let you know about things early on so that the process of resolving them will be quick and relatively painless.

There may be a need take a more formal route if it isn’t possible to resolve the conflict. That doesn’t mean it’s an impossible task, it just might take a bit longer.